This is the third question in our series of 4 Questions. Filmmaker Doug Pray, Director of such films as Scratch, Hype! and Surfwise talks to Rebecca Micciche of Modern Edge about his newest documentary Art & Copy and gives us a hint about his upcoming projects. In a unique look at the people behind the scenes, Art & Copy introduces the audience to the visionaries who have created some of the most influential ad campaigns of our time. Creating a successful dialog between brands and consumers is fundamental to the creative process at Modern Edge and we’re happy to present this interview in 4 parts that will be posted weekly to our blog. 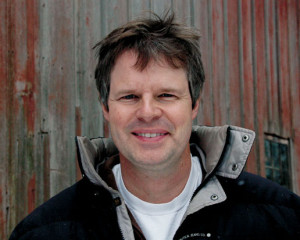 Modern Edge: The film begins and ends with footage of Chad Tiedeman, a billboard rotator. He wasn’t involved in the creative process of developing ad campaigns like everyone else who was interviewed. Why open and close the film with him?
Doug Pray: At first, I wanted to document the daily work of a billboard installation team just to make the film more interesting to watch. I didn’t want a movie that was 90 minutes of talking heads. Seeing lots of billboards going up from the point of view of a worker was a way to show, visually, what was being pontificated about, a reminder that their work is put up in front of us every day of the year. That’s the same reason I wanted to show the details of a communications satellite being launched: if satellites are paid for by the needs of television, and television is ostensibly paid for by ads, then the work of these individuals is essentially responsible for our sending these massive machines into space so we can reflect entertainment and ads to millions of people worldwide. I wanted to ground the discussions in that physical reality. But Chad Tiedeman, who was a fourth generation billboard worker, also became a likable and fascinating character to me, so I decided to interview him.  Visiting his suburban home and seeing him on the internet and watching TV with his family, I decided that to some degree, he also represents “the consumer” in the film. At the beginning of the film, he’s a worker, employed by the advertising industry. At the end of the film, like all of us, he’s the target of all that billions of dollars of advertising.

Check back next Monday for more of our interview with Doug Pray. For more information on Art & Copy and Doug Pray, visit www.dougpray.com or www.artandcopyfilm.com